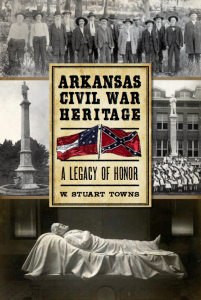 The American Civil War shaped the course of the country’s history and its national identity. This is no less true for the state of Arkansas. Throughout the Natural State, people have paid homage and remembrance to those who fought and what was fought for in memorial celebrations and rituals. The memory of the war has been kept alive by reunions and preservationists, continuing to shape the way the War Between the States affects Arkansas and its people. Historian W. Stuart Towns expertly tells the story of Arkansas’s Civil War heritage through its rituals of memorial, commemoration and celebration that continue today.

This new book is available at local stores and online at www.historypress.net. It retails as an E-BOOK via Amazon, Barnes & Noble, the iBookstore, Kobo & OverDrive.